HE B IRON- STRONG AND CONFIDENT K9 TRAINING 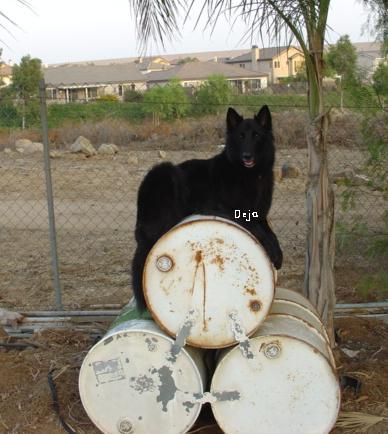 I believe the selection of a dog's name is very important, because dogs tend to live up to their names. My dogs are my passion... a passion that my husband will never fully understand. Music is my husband's first love and I will never fully comprehend the full depth his obsession for music.All my dogs are named after legendary music bands that influenced and forced new evolution in music. Like the bands my dogs are named after, I hope that my dogs will as be a positive influence in the evolution of the working groenendael/ belgian sheepdog. Each name combines the love of music and dogs.

Deja was named after one of my favorite songs from a band that always inspires me to take anything life has to offer. The name had special meaning with the combination of the memories of my first belgian sheepdog and the inspiration I gained thru the music from the band. Deja lives up to her name.... with her spirt, odd sense of humor, and spunk.  She is my Suicidal Tendencies thrash metal/ punk rebel.

Suicidal Tendencies are often credited as being among the first bands to mix hardcore punk and metal into a new sound dubbed crossover thrash. Sometimes regarded as the progenitors of skate punk, they later incorporated significant heavy metal, thrash metal,  and even funk and hip hop elements into their sound. The legacy of the band is in their versatility and in their experimentation with different sounds. The fact that the band has never broken through into the mainstream does not impact their legacy at all but instead helps to cement them in the pantheon of rock as they were one of the first bands to create skate punk and blend thrash, hip hop, heavy metal and funk into a cohesive sound. Music generally acts as a reflection of its time and surroundings. Suicidal Tendencies took this to heart and became the chameleons of aggressive rock `n' roll.

©2006 All dogs are black in the dark, the heart knows not the limitations of color